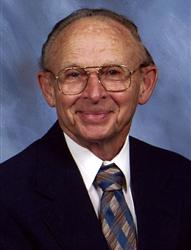 Rev. Sam Seizert, a retired EUMC Associate Pastor, was named Pastor Emeritus for his significant contributions to our Church’s growth and his years of continued devoted service.

During Reverend Sam’s tenure as Associate Pastor, then later as Visitation Pastor and church development director, he helped provide the vision and leadership for the establishment of the EUMC Permanent Endowment Fund Committee.

Although he retired in 1993, Sam has remained actively involved in the church. In recent years, his love of EUMC has brought him back seasonally as much as possible from his home now in Michigan.

In 2002-2003, he led the successful Sanctuary Renovations Capital Campaign. Thereafter, he continued to promote planned giving through educational workshops and activities of the Permanent Endowment Fund Committee.

In 2008, Rev. Seizert was the second person to receive The Robert C. Holmes Award, presented annually by the Florida United Methodist Foundation to a member of the clergy who has been instrumental in promoting the practice of planned giving at the local church level.