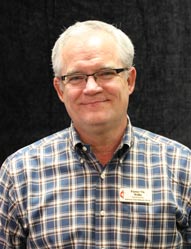 Pastor Vic is married to Debbie, who has been an ESE teacher in Elementary Schools in communities they have lived, and they have four children, Chris, Bekkah, Zack and Abbey. Chris is a 2004 graduate of Florida Southern College with a degree in religion and he is married to Abigail Johnson Willis and they currently reside in Boynton Beach. Both Abi and Chris work in the Palm Beach County Public School System. Bekkah is a 2007 graduate of Florida Southern College and is beginning a masters degree program in social work in the fall of 2010 at Florida State University. Zack is currently attending Florida State University as a senior in undergraduate studies. Abbey will be working as a team member at the Warren W. Willis Summer Camp at Leesburg this summer and will start at FSU this fall as a Sophomore undergraduate student.

​Pastor Vic loves to preach and teach God’s Word. His Call to ministry came through his own realization of the great gift of God’s Grace in Christ at an early age. There was nothing else he could do in response to that gift but tell others about it! He continues to be compelled in his call by that same vision—that all people need to know about God’s Love and His desire for them to be in relationship with Him. Vic believes the best sermon is the one lived out as we let our lights shine for Christ.

Vic loves to play guitar, sing, read history (currently obscure American Civil War era stories), he loves to travel, has led three pilgrimages to the Holy Land with church groups as well as several other spiritual and historical journeys throughout Europe. Vic enjoys running, bike riding and hiking (ask him about getting lost in the Everglades).

​Family is huge with the Willis’–in August of this year they will experience their first bout of empty-nestism—pray for them. We hear it’s not terminal. We also hear it can lead to a new lease on life! Some of you who have been down this road can help counsel us.